Stofix Implemented a Hotel Façade in Cooperation With Yudanda UK

The façades of the hotel completed in Canary Wharf were constructed using Stofix’s facade technology, which allowed quick implementation and the installation of the wall panels without scaffolding that requires a lot of space.

Stofix implemented a brick-clad façade structure on a hotel building in Canary Wharf, London. Implementation was done in cooperation with Yuanda UK, which is part of Yuanda Group, the world’s largest facade contractor.

Stofix was chosen to implement the brick facade cladding as a result of its technically best solution. To top it all, Canary Wharf is Stofix’s first project in the UK.

– “We immediately managed to receive an architecturally challenging project with such a prominent location. The implementation of the Canary Wharf’s hotel facade is an important international opener for the future of the company as a whole,” says Jarkko Lasanen, who is in charge of Stofix’s international business.

The new façade had to fit in English architecture, and Stofix’s system had to address the technical challenges of the building. Canary Wharf was a very challenging project also in the sense that it is one of the most prominent and busiest finance centers in London, with not much space for construction. 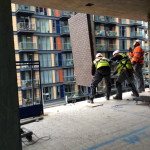 The façade was made utilizing unitized systems, which were lifted up onto the wall one at a time. The system’s benefits are speed and the fact that no scaffolding has to be erected outside the building.

– “Our system is the best solution for this need. This was the first time that our panels were mounted on the wall from the inside. The technique works well if space is very cramped with no room to erect scaffolding outside,” says Lasanen.

– “In addition, our solution was practically the only alternative to implement a ventilated facade,” Lasanen continues.

– “The project was implemented as planned and we managed to get the work done in less than four months,” Lasanen says. 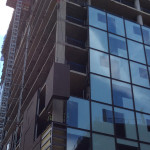 – “With Stofix’s solution, the customer saved a lot of time and money. The customer has also been more than satisfied with the outcome and appearance of the work.”

For Stofix, the success of the project is an important proof of its facade technology expertise.

– “For us, this is not just an individual important deal but a significant opener in a new market area. The UK is one of the most potential markets in the world for us,” Lasanen says.