Stofix had the opportunity to work with Yuanda UK in Canary Wharf, London. The project was a challenging one but was completed as planned, and has already raised much attention.

The façade lining project carried out by Stofix at a hotel building in Canary Wharf, London, was completed this autumn. The cooperation with Yuanda UK was productive.

The greatest challenge was the lack of space for the building project. The new installation method where Stofix elements are installed from inside the building proved its excellence in the project. 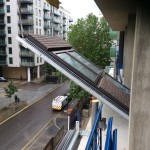 – This method of installing the unitised system was a success and will be used in the future. The possibility to use our product in this way has already attracted much attention, says Jarkko Lasanen, Director of International Business at Stofix.

– The project has also raised much discussion in other respects, as well. The hotel building is impressive in every way, and the Stofix brick slip solution comes into its own. The elegant implementation provides us with much added value, showing local customers what we are capable of, Lasanen says.

Attracting interest as far as the Netherlands 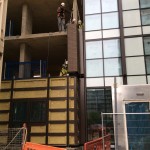 From the point of view of Stofix and the client, the project was a highly successful one.

– Canary Wharf was an extremely demanding area – probably the most demanding we’ve ever dealt with. However, we faced zero problems during the project. Everything went as planned – from production to installation, Lasanen says in summary.

– We have received nothing but positive feedback. In addition to the installation method, people have appreciated the elegant appearance of the building. The building has been visited as a reference site from as far afield as the Netherlands.